PresMfi signs a memorandum of understanding with Presbyterian Health Services 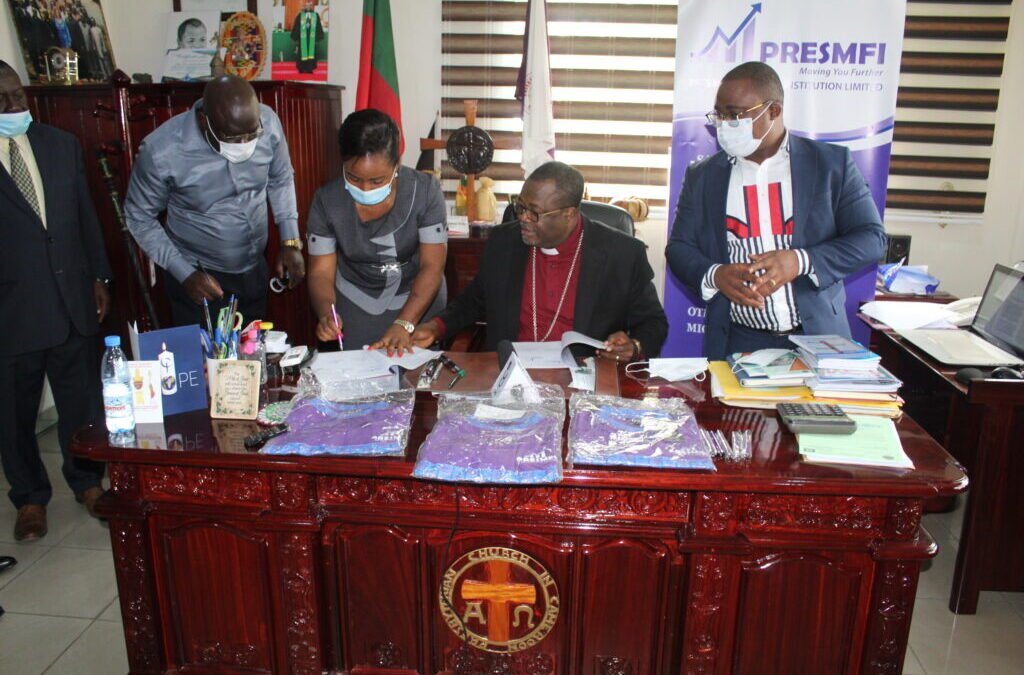 #MOU
#PresMfiVsHealthServices
The PCC Moderator – the Rt. Rev. Fonki Samuel Forba has presided over the signing of a Memorandum Of Understanding (MOU) today Friday 12th March 2021 between the PresMicroFinance (PresMfi) and the PCC Health Services. The Moderator representing the PCC Health Services and the PCC Financial Secretary Mr. Ngole Ndive Mbuayo Mosuka representing the PresMfi have signed and sealed a business deal where PresMfi will sponsor the construction of an ultra-modern state-of-the-art hospital in Bamenda as a loan to the tune of 600.000.000 FCFA.
The agreement that took place in the office of the Moderator of the PCC, was witnessed by the Chairman of the Board of Trustees Mola Kingue Jacob, the Health Services Secretary – Mr. Atoh Derek Shu, the Manager of the Financial house – Mr. Malafa Joseph and his team, the PCC communication Secretary, the Development Secretary, the PCC Project Officer, and others.
The Moderator speaking to PCC Tv and CBS radio Buea revealed that this project is targeted to be received by December 2021. The modality of the agreement is that PresMfi will bear the total cost of the construction and get involved in the recovery of its investment before handing it over to the Health Services of the PCC.
PresMfi the brainchild of the PCC Moderator, a category two (2) microfinance is proving its place in the life of the PCC as a tool in helping the church achieve its mission. Not long ago, the Moderator as proprietor launched a loan scheme at the PresMfi where 200.000.000 FCFA has been blocked where all PCC workers can get a loan to better their future up to the tune of 10 million francs each, payable in 3 years, collateral being the salary of the worker and a notarized agreement that the staff will work for the PCC for at least 3 years.
PresMfi remains true to its motto that “Moving you Further”
Story by #PCC Webmaster.
https://www.youtube.com/watch?v=YOYkwg5MatM