THE SYNOD COMMITTEE MEETING AT SYNOD OFFICE BUEA
The Synod Committee Meeting dubbed “Synod Committee of Awareness” has held at the Synod Office Buea on Monday 21st November 2022 to deliberate on issues affecting the life of the church.
The Synod Committee meets each year after the General Synod to deliberate on the life of the Church. The meeting was graced with an honoured guest from the Methodist Church of Great Britain – the Rev. David Alderman Ralph.
Resolutions from this meeting will be disseminated to Presbyterians by the competent authorities. 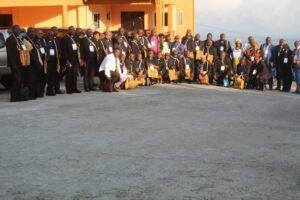 NEW SYNOD OFFICE AKA FAITH PROJECT HAS BEEN BAPTIZED “THE ARK”
OPENING SERVICE FOR SYNOD COMMITTEE OF AWARENESS.
Finally, the new Synod Office has been inaugurated by the Moderator of the PCC – the Rt. Rev. Fonki Samuel Forba. This took place on Sunday 20th November 2022 at the headquarters of the Presbyterian Church in Cameroon at Buea during a dual occasion which also marked the opening service of the Synod Committee meeting dubbed “Synod Committee of Awareness.”
The new Synod Office which at inception was called the Faith Project has been officially recognized by the Synod Exco as “The ARK” a structure that physically resembles Noah’s ark and its theological interpretation of saving humanity for God
The crowd-pulling event brought in PCC Christians from far and wide both nationally and internationally.
The President of the Republic of Cameroon was personally represented by the Minister of Territorial Administration – Minister Paul Atanga Nji. Also present were the Minister Delegate at the Presidency in Charge of Supreme State Audit, Minister Mbah Acha née Fomumdam Rose Ngwari, the Governor of the South West region Governor Bernard Okalia B., the Mayor of Buea municipality and many others
Some partner churches like the Methodist Church were represented by Rev. David Alderman Ralph, the Deputy Chair of the Northampton Methodist District – Great Britain. Also present was the Imam of Buea and others.
The Moderator, Synod Clerk – Rev. Miki Hans Abia, and the Financial Secretary – Mr. Ngole Ndive Mosuka Mbuayo were decorated by the Synod Committee Exco and the Fako North Presbytery for their hard work and cooperation that have led to the serenity witnessed at the helm of the PCC with the ARK structure as a visible testimony. The Moderator was also decorated and given a Bakweri title by the various chiefs who were present.
Led by Maitre Abeng Roland – Chairman of the Steering Committee, a fundraising was done to help in the finishing of the New Synod Office.
The ARK with about 45 offices and 25 toilets will now house the offices of the Synod Office and the former structure will be transformed into a Hospital Complex to serve the Buea population and environs.
The event that was heavily mediatized brought together both state and privately-owned media houses both print. And audio-visual. 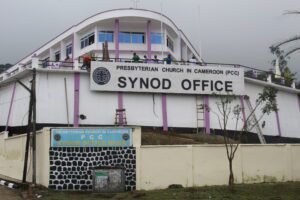 May God continue to bless His church the PCC and its leaders.
Story: Rev. Numfor Godwin (PCC Webmaster)

Message of the Moderator on PC Day 2022

The Moderator announces the theme for PC Day 2022 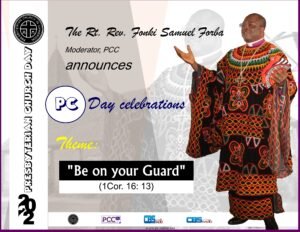 The education Secretary Mr. Nje Kale makes public the analysis of the GCE 2022 results for the PEA

Click the link below to see the full results